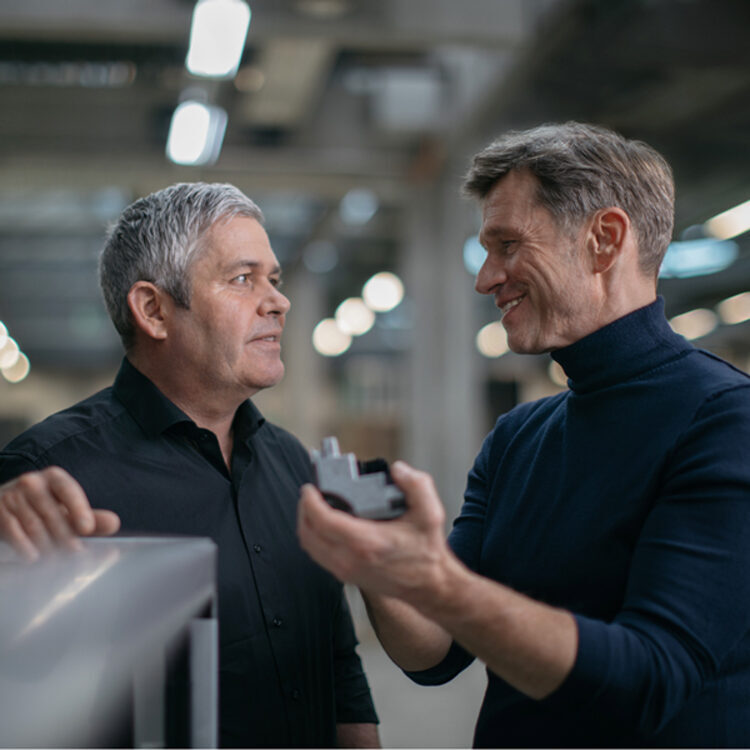 Family tradition turns air and passion into a successful company.

Interview with the owners, Tobias and Christoph Meyer

The Prime Tower in Zurich, the KKL in Lucerne and the Monte Rosa Hut in Zermatt - the three prestige buildings have one thing in common: fresh air from the Seven Air facilities circulates in them. «Our equipment is invisible to the visitors, residents and guests of the buildings, it is usually in the basement,» says Christoph Meyer, Chairman of the Board of Directors of Seven-Air Gebr. Meyer AG, as the company is known by its full name. His brother Tobias, CEO of the company, adds: «In 2018 we won the Prix SVC at the KKL in Lucerne. Many people were aware of us and our industry for the first time with this award - they were amazed when we told them on stage that there were ventilation slots under each seat in the KKL.»

In the construction and ventilation industry, however, Seven-Air's green facilities are anything but unknown. Since 1985, the SME from Lucerne has defended its position as the market leader in Switzerland with 400 employees. What is the secret of Seven-Air's success? «Since our father founded the company in 1971, we have had a very good product that we are constantly improving and developing. It is something like the 'Rolls Royce' among ventilation systems,» answers Christoph Meyer. «Only not so expensive», adds his brother dryly.

Asked about their functions and cooperation, the two brothers jokingly call themselves interior and foreign ministers. Christoph Meyer, Chairman of the Board of Directors, is responsible for Internal Affairs, while CEO Tobias Meyer is responsible for external affairs. They have managed the business together since 2004. «We know each other so well that sometimes we don't even have to look at each other in meetings to know what the other thinks,» says the CEO. «Of course, there are situations in which we disagree. But after half an hour at the latest we have a solution,» his brother says. Tobias Meyer nods and sums up: «As the head of a family business, we have made a commitment to our family, and we have great respect for it». The Seven Air drivers agree that family-run companies are superior to management-run companies, and Tobias Meyer explains: «We never accept losing a job. In the rare cases where this happens, we meticulously scrutinize everything down to the last detail.»

Strategy: Everything from a single source

Seven-Air systems treat air in seven different ways: filtering, heating, cooling, conveying, humidifying, dehumidifying or recovering energy. «It is part of our strategy that we offer everything from a single source and also manufacture everything ourselves. This is the only way to keep quality under control one hundred percent,» explains Tobias Meyer. Even the metal housings of the appliances, including powder coating, are produced in the Seven-Air production halls in Hitzkirch, Lucerne. Because these sheet metal processing systems are very cost-intensive, a new line of business has emerged: Seven-Air also handles orders for third parties: «In this way we achieve a higher utilization of the machines, they pay for themselves faster and we are more competitive compared to foreign suppliers», says Christoph Meyer.

When his father purchased the powder coating plant in the 1990s, he refused to put it into operation as described by the manufacturer. Tobias Meyer explains: «The powder applied to the sheet metal parts is baked in an oven at 200 degrees. According to the manufacturer, this heat would then be wasted unused. Not like that, found the father. We developed a system with our own equipment to remove the heat. We use it to heat the process water and heat the entire hall.» Both brothers still shake their heads today when they think about the wasted energy, and Christoph Meyer sums it up: With additional investment costs of 300,000 Swiss francs, which we had already amortized after two years, we have been saving 900,000 kilowatt hours of electricity annually since then.»

Better or equally good and cheaper

To ensure that the heat does not escape during the various processes, the devices must be perfectly insulated. «We have developed an insulation foam that is almost 40% more energy efficient than mineral wool. In addition, it is much denser, takes up less space, is much more stable, not respirable and can be disposed of as normal in the waste incineration plant at the end of the day.»
The brothers are inspired by conversations with customers and visits to trade fairs. If there is an idea in the room, research and testing take place. «However, we only bring new developments onto the market when we are significantly better or of the same quality and cheaper than our competitors», says Christoph Meyer.

Potential to take off

The SME is currently researching a project that could literally make it take off - special air conditioners for aircraft that are used while the aircraft are on the ground between landing and next take-off: At most airports, the aircraft have to run one of the engines to operate the air conditioning. This results in CO2 and noise emissions. For Zurich Airport, the company developed a system decades ago that is connected to the stationary aircraft. «This means that 90 % less CO2 emissions are produced in Zurich than at other airports,» explains Tobias Meyer. In cooperation with another Swiss company, Seven-Air is now working on a project to be able to offer such solutions worldwide. Tests and negotiations are already underway with the world's largest airports.

No time for unnecessary bureaucracy

«For such large projects we sometimes need outside capital, even if we always finance everything ourselves,» says Christoph Meyer. The family business has been a Credit Suisse client ever since the brothers were able to think. «We value the human touch and the straightforwardness of dealing with our bank, we don't have time for unnecessary bureaucracy. For example, we presented our plans to two banks for financing. We gave the advisors 20 minutes and then came back. The Credit Suisse consultants sat there and nodded when we came in. The other bank asked for various other documents, a business plan and so on,» reports Christoph Meyer and then gives the floor to his brother:
«If you look at our results of the last 30 years, many things should be immediately clear. Credit Suisse immediately understood that and we appreciate that.»
The two brothers exchange views and Tobias Meyer continues: «The father always said in such situations: 'Business plan? I have it up there,'» he taps his forehead laughing. Serious again, he continues: «I imagine it to be quite demanding as a bank to be able to read the different entrepreneurs, because that's what it's all about. Precisely because the bank also bears a certain risk. Credit Suisse communicates with us in this way: We trust you.»